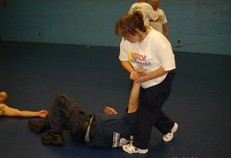 Immediate Tactical Response training is aimed at allowing trained officers to neutralize and take control of a person possessing hostile intent. ITR is presented as a follow-up to a BPR encounter, which ends up with a physical confrontation between the officer and the person interviewed. ITR is also being proposed as a stand-alone program, which allows officers to take over criminals and terrorists in a non-lethal manner. The ITR module also deals with the phenomenon of suicidal terrorism and provides the means to identify, approach and take control over such a terrorist in a non-lethal manner.